Let's start with a general definition of Fullspeed: Racing on a map that has no intended braking or RNG based elements with the focus on high speed and precision.

To learn fullspeed mapping it's important to realise a couple of things:

There are a lot of blocks in trackmania, the way you use, wich one to use and how you place them can be quite the challenge! To start with there are 4 ways to place a block. The options are shown in the bottom left of your screen in the editor. 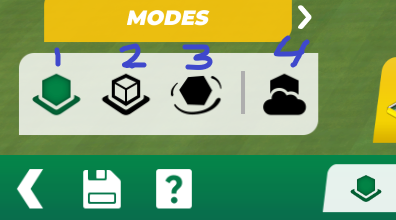 1. Block mode: This is the standard blockmode and is the most used in mapping to build elements and anything that just involves connecting one block to another

2. Ghost block mode: This is allows for blocks to be placed in eachother or on top of eachother. This is still on the normal grid and does not allow blocks to be rotated.

3. Free block mode: This is the most freedom you are going to get in this game, this feature allows you to rotate, place and connect any block at any place/angle you can imagine. This is a feature you should only use when you cannot use one of the options above or when you are using it for a very specific purpose. Overusing this feature might result in bugs and lower quality maps.

4. Air block mode: Removes the feature that connects placed blocks to the ground and allows for crossing over previously placed block without blocking them.

Trackmania knows multiple surfaces you can drive on: 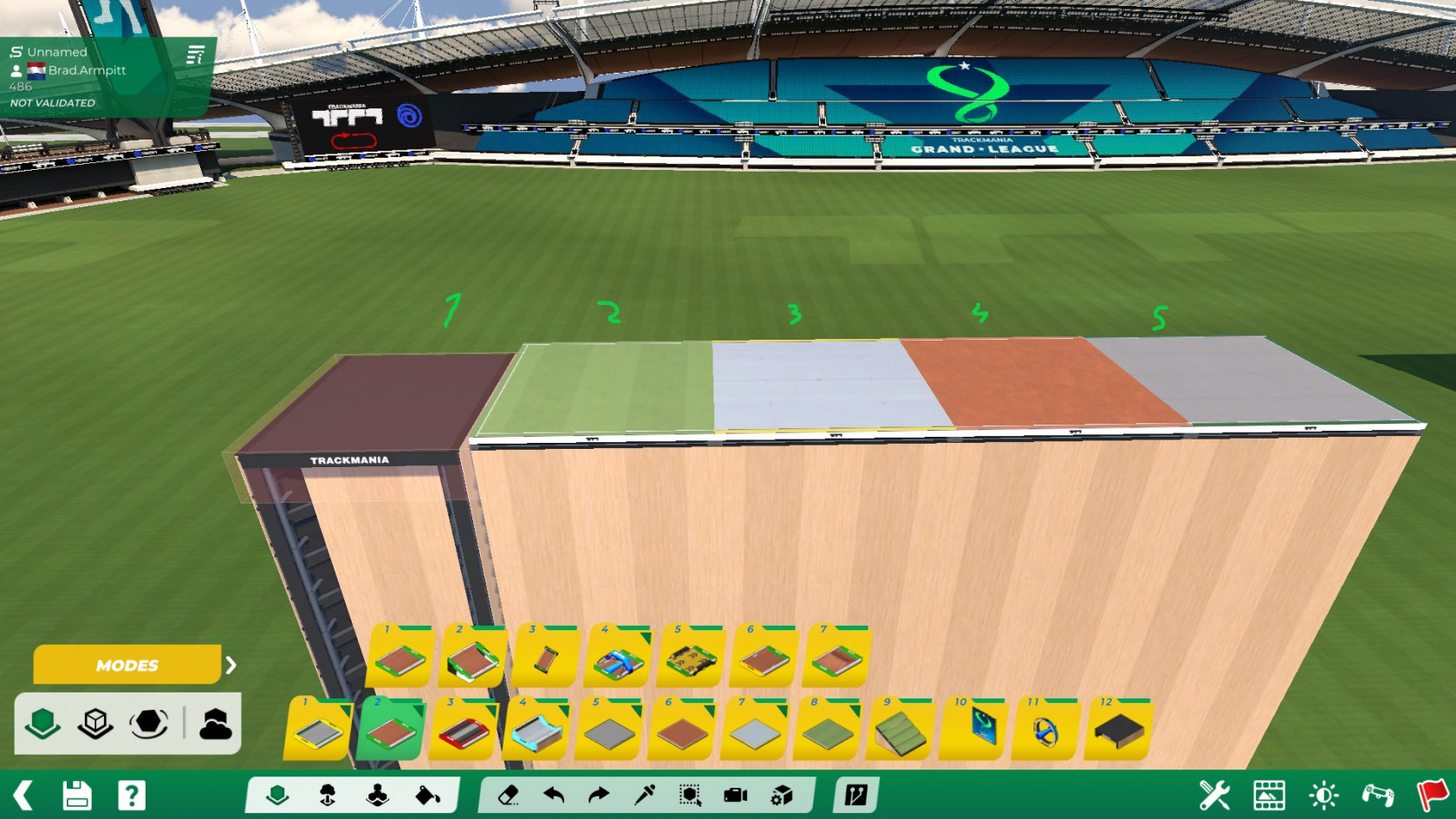 1- These black blocks are the only block that differs in height to all the other blocks, without having to resort to free mode, they are hard to use because there are only a limited amount of blocks that are available. It's also harder to see skids on this so dont do any large SD's on the black surfaces. Use the black blocks for transitions or scenery, i wouldn't recommend doing a full track with these.

2- Grassblocks should be used sparingly in FS, there are very fringecases of use for this block but in general i would not use these unless you are going for a themed map or are forcing some sort of slide.

3- Ice, one of the new surfaces in the new Trackmania. Ice is very difficult to navigate and is really not that usefull in fullspeed as of now. Maybe later on we find a good use for this block but for now i would stay away from iceblocks.

4- Dirt, i think dirt is the most compatible with fullspeed, still it doesnot have a lot of uses, there are a few instances where it might call for a dirtblock or dirtpart. But that would already go more to the funspeed section of FS. In general dirt is most compatible so if you are looking for something to start a slide or something like that it's usefull.

5- Platfor/road, the real bae of FS, best and easyest surface to make an FS track with. The platform and road in this game are on the same height so you can freely interchange between them and i would recommend a good mixture of road and platform to make sure your track is not monotone.

Loops are a classic feature in Fullspeed mapping. Here are some guidelines to help you use loops the best way possible! 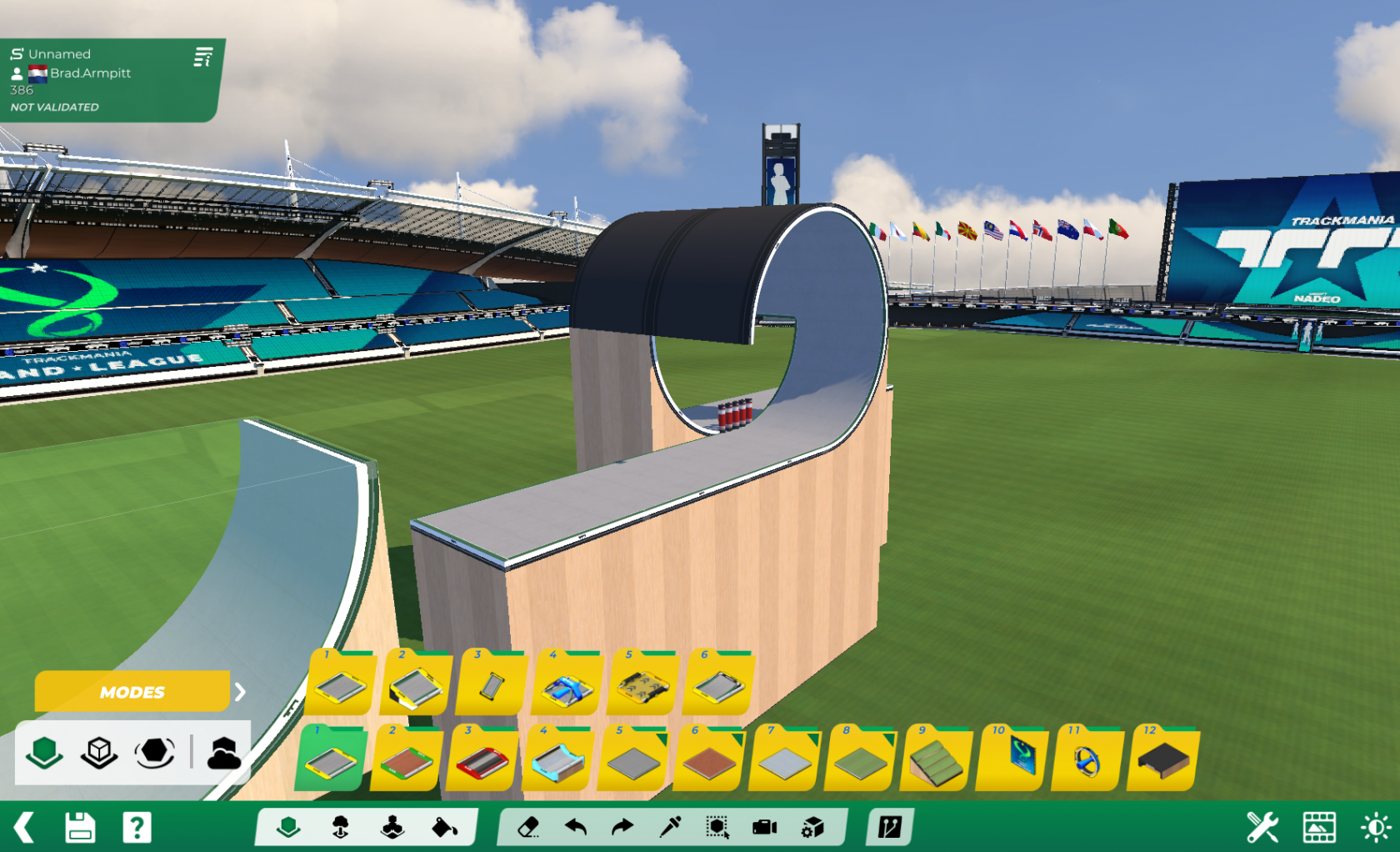 In the image above you see a classic example of a loop. To make a looping adds to your map instead of taking away from it here are some tips!

Wallrides are another staple for fullspeed, and they get used the most in fullspeed and provide a nice variation to plain corners or getting over a section of track. A few things to keep in mind while making/using wallrides:

- The green line, represents a good line into the wallride, if you allow a good line it preserves speed and allows for a tight line.

- The red line, represents too sharp of a line into the wallride wich will cause airtime on entry and exit. To fix the red line the actual wall needs to be placed further to the right to accomodate a better line. Alternatively dropping the wallride down a block and add a normal wallblock would also help solve this, although this does not work if the entryline is too sharp. In the blue circle you can see the wall is a block lower and has a space inbetween the wallride and the quarterpipe. 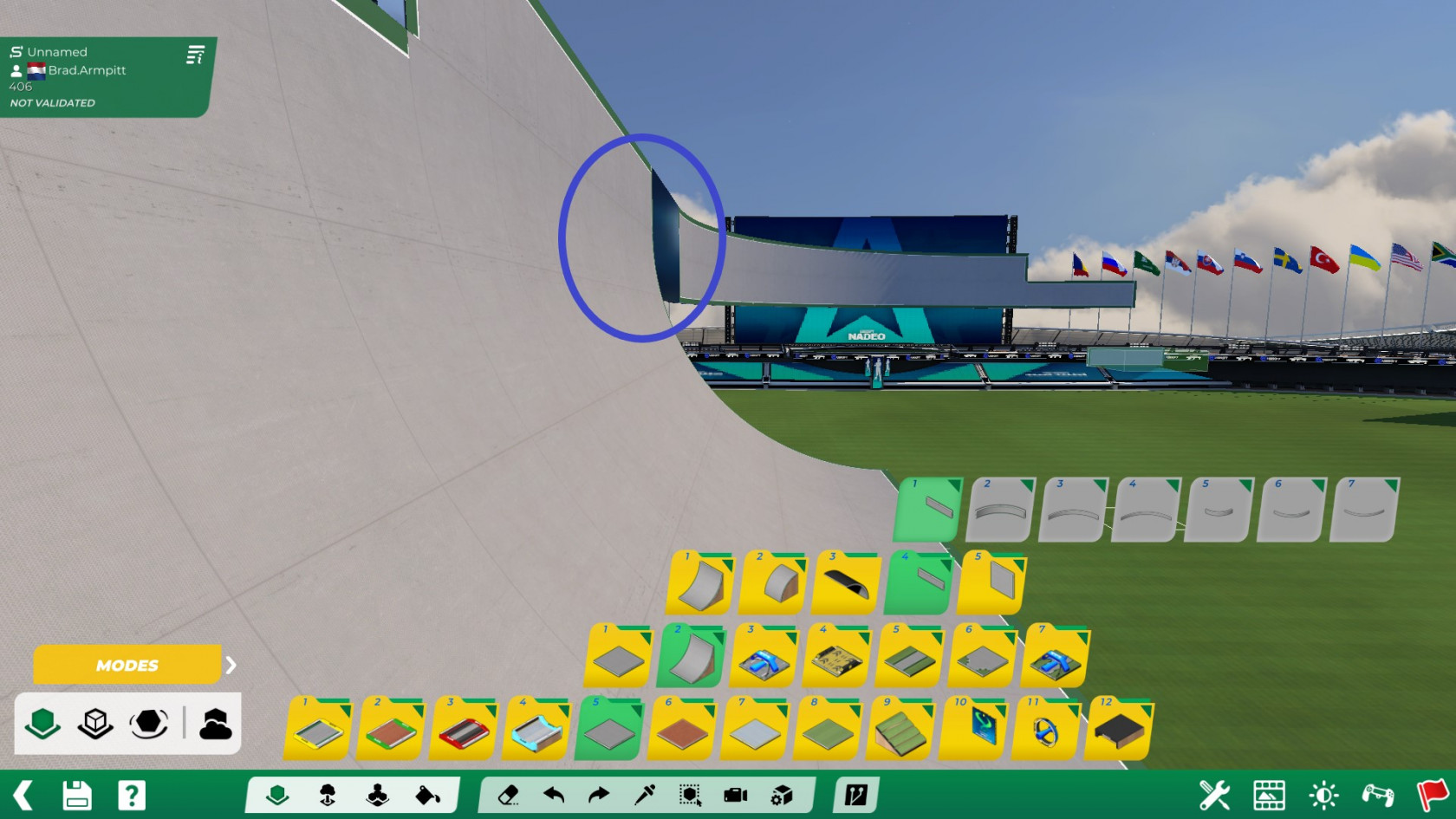 A wall exit goes by the same general rule as the entry, a minimum of 6 quarterpipes as exit increasing the higher your speed is. exiting with the downhill wallexit works better than entering the wall on a slope.

Remember when building a map it's important to use a combination of elements in a track and not just plonk a couple of wallrides in a row and expect players to enjoy it. Find a good balance and feel out your map!

Turnovers are a fullspeed staple, they are used to make a quick switch in direction and change the pace of the map. Done well they allow players to maintain speed and done poorly they give the player little time to adjust and bug or slow the player down.

To start with a turnover it's important to use the same baserule as with Wallrides, the higher your speed is the longer your Turnover entry must be. So the faster the TO is add more quarterpipes to allow the player to ease into the correct line. 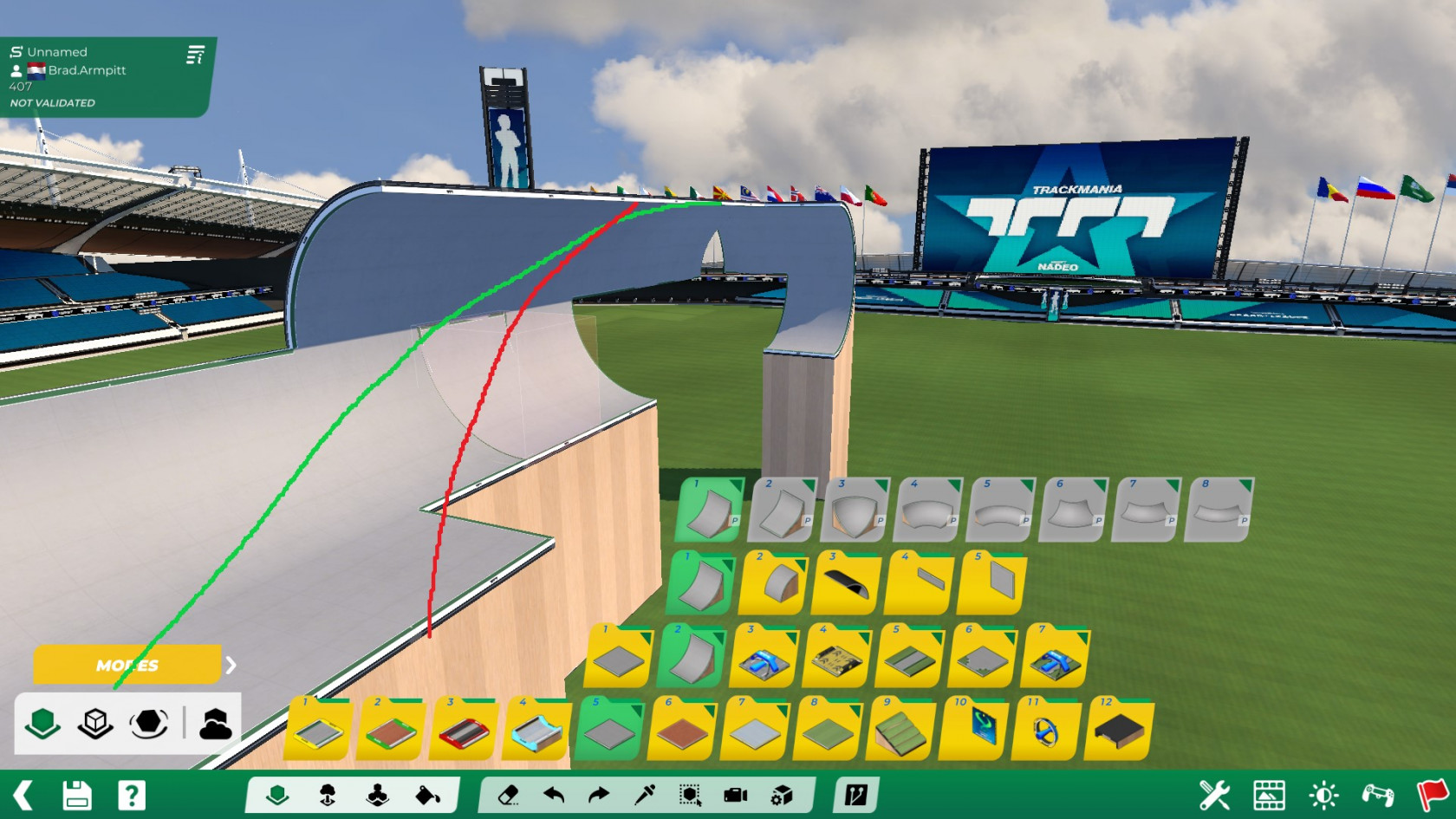 The red line in this image shows a sharp line into the Turnover, taking this line would send the player flying of the TO or the player would have to steer dramaticly losing a lot of speed. Allowing the player to take The green line sets the player up to drive the right line, they might still make a mistake but that would be one that they made. Your job as the mapper is to guide the player into the right line, but not to force a certain movement pattern.

For turnovers its really important to have a visible Apex, the image below helps to explain what i mean by apex. 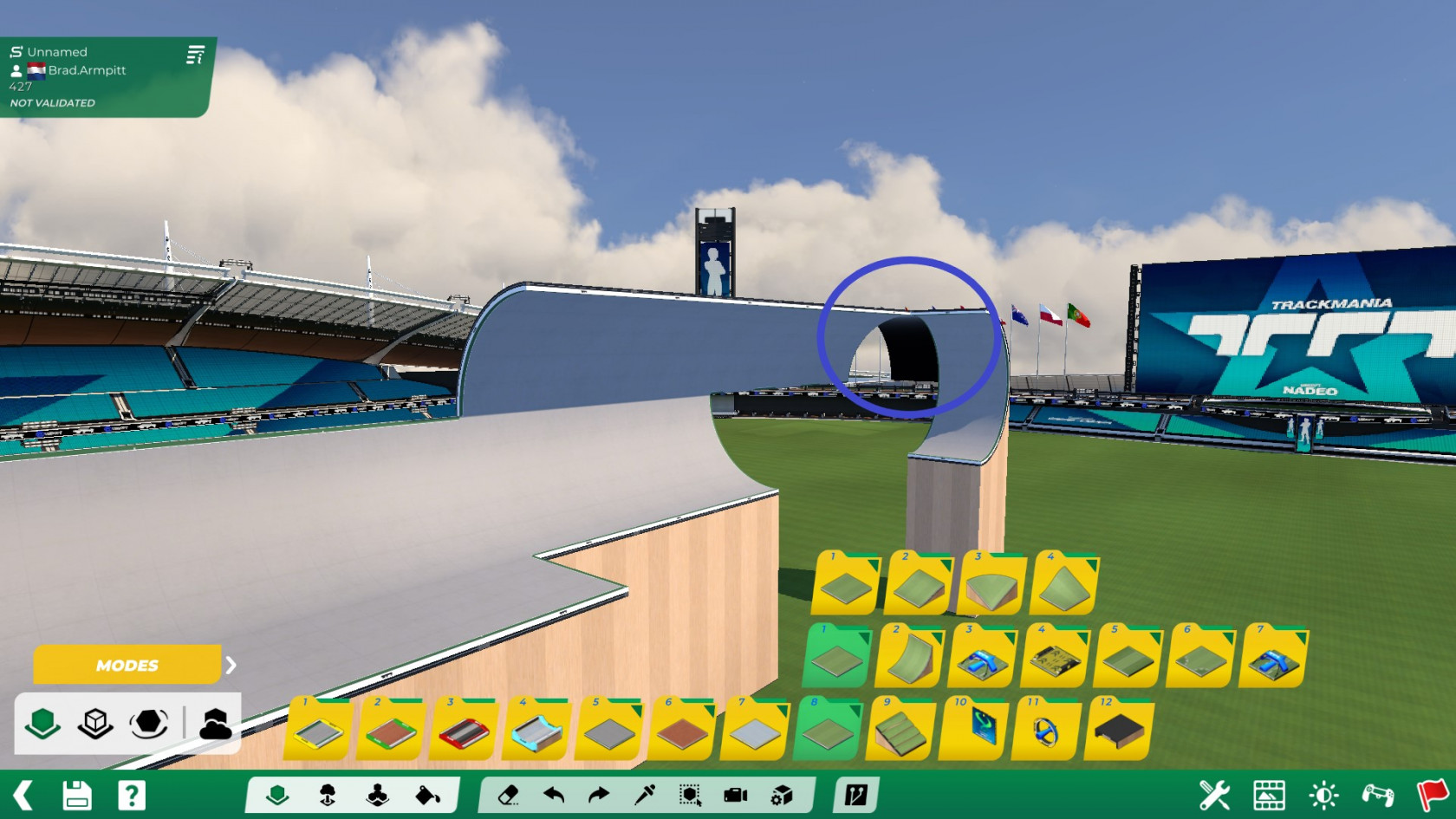 The part higlighted in the picture is the Apex, where the quarterpipes reach eachother. If you misplace the Apex to close to the entry, the player will have to steer drasticly to make it. When you place the Apex too far back the player loses grip and starts falling off the quarterpipe resulting into a bump on reaching the Apex. Make sure to test your turnovers a couple of times to make sure it's the desired lenght.

Highlighted in the Blue circle is something i like to do to make the Apex very visible. This is a advertisement sign rotated with Free Block Mode and placed next to the Apex quarterpipe, this game doesnot have any lines in the quarterpipes to help players see where the Apex is and in this way i like to help the player. This is not needed just a small tip you can use if you think your TO could use it.

Lastly remember to (same as with all elements) wait with turns and jumps untill the player has cleared the TO, needing to immidiatly turn or line up for a jump after a TO can be hard and i would suggest leaving at least 3/4 blocks depending on speed to allow players to adjust.

Corkscrews and tubes are slightly more advanced features than the loop/wallride/turnover. They change up the flow of the track and give more variaty to fullspeed tracks. Corkscrews in particular can be hard to do right, you have to take speed, angle, height, entry and exit into account.

But let's start with tubes, they are basicly a big loop stretched out so the player takes it sideways. There is few rules to a tube, besides making it long enough so the player doesnot have to drasticly steer in the tube. If they have to steer alot in a tube it reduces speed and may lead to annoyance with players. 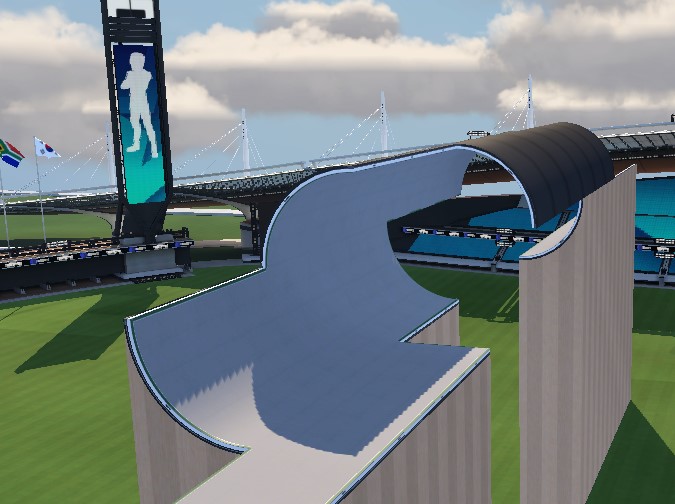 Above you see a standard version of a tube, variations might be tube with a sloped entry or exit, but can also be followed by a cork/wallride. Make sure to test your line so that you don't cut away parts of the tube you/players might need to complete it. Keep in mind that there are always faster (unless mudda.exe) and slower (unless James May) people driving your track, make sure to keep both in mind when building.

Corkscrews are less forgiving than tubes, they require a lot of precision and testing to get right. I will touch opon a few things that you have to look out for! 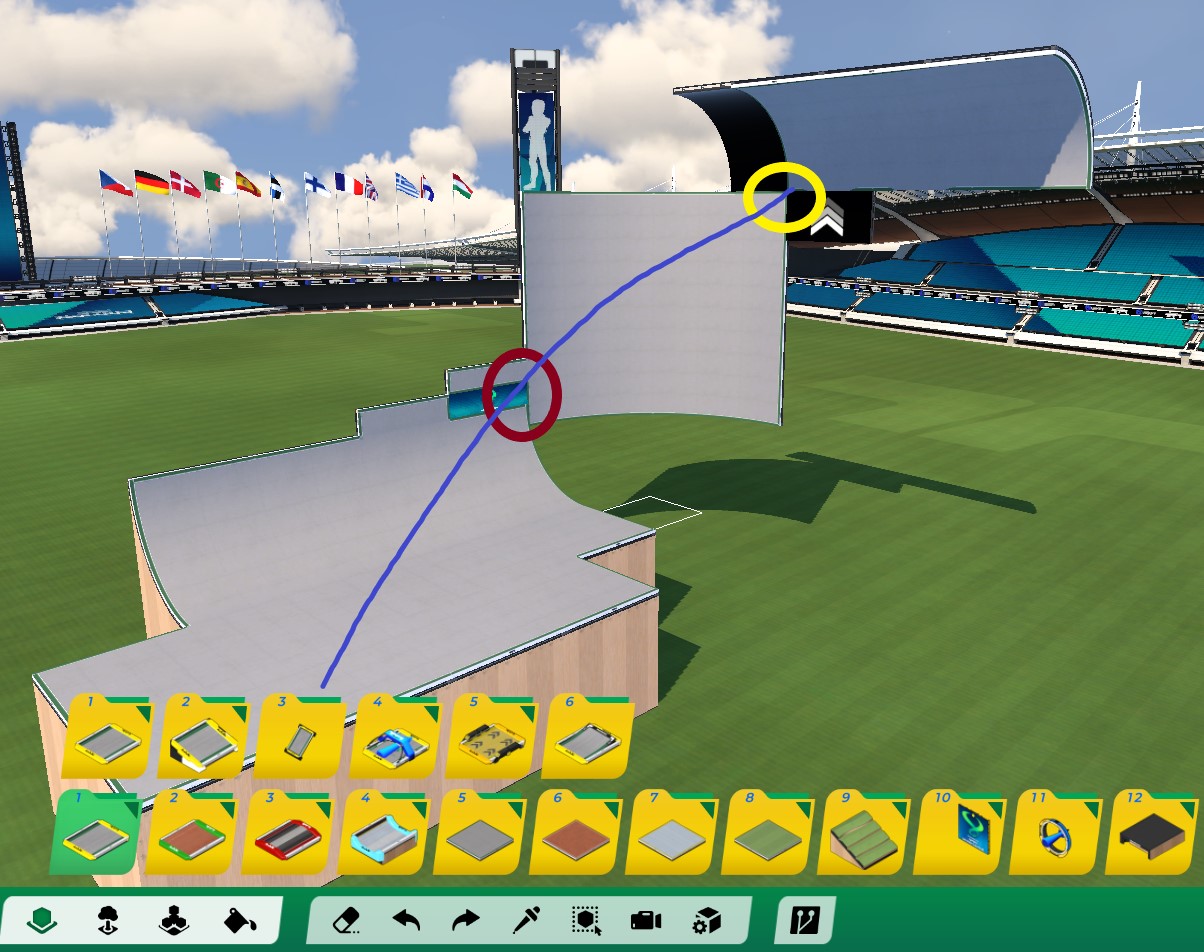 The red and Yellow circle represent the Lower Apex and Top Apex. Simply put the Apex in a Cork is where the wall connects to the quarterpipe. The best line through any Cork is represented by the blue line, so always aim to have your race line hit both Apex' to ensure the Corkscrew is build right. This is the same for a Cork going down.

Speed is very important, speed decides how many wallpieces you use, how big your wallpieces are and how high you go. Again if the Cork is slower = the smaller when the wall pieces have to be. Keep in mind that there are faster and slower racers and your track should be possible for both.

Transitions are hard to implement. They can feel amazing when done right, but when done wrong they break the flow and can really give the player a bad feeling about the map. Transitions give an interesting twist to a otherwise boring map by switching surfaces or height of the surface you are driving on.

When using transitions be sure to mix it up, do not use the same transition 4 times in one map ( unless you are going for a themed map). Try to differentiate in surfaces and height. Consider going down/up/left/right. Or even re-using a previous block to navigate a different route. Whenever you are trying something transitional, make sure to test it a good 20 times to prevent any bugs or bumps.
If you try something new that you have never seen before, make sure somebody else tests it aswell to make sure you have a good idea. Sometimes you might think something works and it takes another player to figure out if it really works.

But for what it's worth almost anything works as long as its smooth well build and well thought out. So do as your hart desires and make the best stuff you can think of!

Export
Back to top